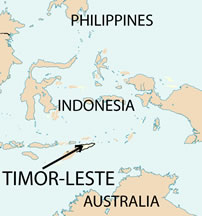 The two agencies in question are the police, the PNTL (Policia Nacional de Timor-Leste) and the defence force, the F-FDTL (FALINTIL Forcas de Armadas de Timor-Leste). The national police institution was created from scratch in 2000 and subsequently midwifed by a series of UN peacekeeping missions, while the defence force – which draws its leadership from the liberation movement that fought for Timorese independence from Indonesia – had less direct international support.

Tensions and unresolved roles between (and within) these two groups led to a political crisis in 2006. The crisis was sparked by an internal dispute within the army over alleged discrimination and unfair treatment, but quickly took on a larger character and intertwined with a range of other grievances and political cleavages. During April-May 2006, 37 people died, many houses were destroyed, and 150,000 Timorese (15 per cent of the entire population) were displaced from their homes amid the violence. The PNTL and F-FDTL were at best incapable, and at worst complicit in crime and lawlessness. Large sections of the police unravelled altogether.

The violence that erupted in 2006 tragically demonstrated that the national and international efforts over six and a half years had not succeeded in developing and nurturing effective security institutions. Judged with the benefit of hindsight, many of the institutions created by the UN and bequeathed to the new state were simply not fit for their purpose. Their inability to preserve order led to the return of UN police with executive authority and a one thousand strong Australian-New Zealand peacekeeping force.

Since then there has been noteworthy progress. Following the assassination attempts on the country’s Prime Minister and President in February 2008, the previous antagonists came together to lead the search for those involved in the events. By any standards, the police and army cooperating together when, two years previously, they were shooting at each other, is a remarkable improvement. Many of those internally displaced in the 2006 violence are starting to return home.

However, deep challenges remain in terms of institutional reform. Developing capacity in the PNTL is difficult. The international police are confronting both a sceptical and resistant national police institution as well as a public, seared by recent memories of bad practice, that is reluctant to invest trust and legitimacy in it. Donors engaging with the police accept that this will be a long-term process.

Challenges also remain with the F-FDTL – not least the size, makeup and role of the organisation in any new security architecture. Resolving the structure and function questions surrounding the
F-FDTL will be a vital aspect of ongoing reforms to the security sector.

Many of these long-term issues are being tackled by a government-led review of the security sector, with the support of the United Nations. An agreement to commence the review was signed in June 2008.

As an aside, the actual phrase ‘security sector reform’ has little traction within Timor-Leste. Profound uncertainty remains as to what the phrase actually means. The phrase may be intimately familiar to headquarters-based policymakers, but it is still somewhat alien to those on the ground actually engaging in reform.

Useful links for SSR in Timor-Leste

The Document Library contains links to a number of SSR related documents either focussing specifically on SSR in Timor-Leste looking at the country alongside others as a case study. A selection of these are listed below: