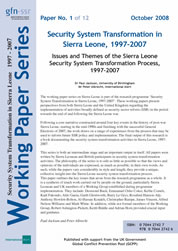 Printed in the UK by the University of Birmingham, 2008

The working paper series on Sierra Leone is part of the research programme ‘Security System Transformation in Sierra Leone, 1997-2007’. These working papers present perspectives from both Sierra Leone and the United Kingdom regarding the implementation of activities broadly defined as security sector reform (SSR) in the period towards the end of and following the Sierra Leone war.

Following a core narrative constructed around four key events in the history of post-war Sierra Leone, starting in the mid-1990s and finishing with the successful General Elections of 2007, the work draws on a range of experiences from the process that may be used to inform future SSR policy and implementation. The final output of this research is a book documenting the security system transformation activities in Sierra Leone, 1997- 2007.

This series is both an intermediate stage and an important output in itself. All papers were written by Sierra Leonean and British participants in security system transformation activities. The philosophy of the series is to edit as little as possible so that the views and opinions of the individuals are expressed, as much as possible, in their own words. As such, while the papers vary considerably in style and length, they provide a unique, collective insight into the Sierra Leone security system transformation process. This paper outlines the key issues that arose from the research programme as a whole. It is a synthesis of much work carried out by people on the ground, particularly Sierra Leonean and UK members of a Working Group established during programme implementation. They include: Desmond Buck, Emmanuel Osho Coker, Kellie Conteh, Kadi Fakondo, Aldo Gaeta, Garth Glentworth, Barry Le Grys, Rosalind Hanson-Alp, Anthony Howlett-Bolton, Al-Hassan Kondeh, Christopher Rampe, James Vincent, Alfred Nelson-Williams and Mark White. In addition, while not formal members of the Working Group, Robert Ashington-Pickett, Keith Biddle and Adrian Horn provided crucial input and guidance.

This project included a panel discussion on Linking Development and Security in Sierra Leone in May 2008 at the Department for International Development, London.

A book on Security System Transformation in Sierra Leone, 1997-2007 will be launched at the Department for International Development on 26 February 2009. For further information, please visit our Events Webpage.