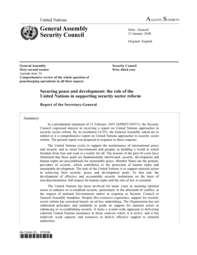 The United Nations has been involved for many years in assisting national actors to enhance or re-establish security, particularly in the aftermath of conflict, at the request of national Governments and/or in response to Security Council or General Assembly mandates. Despite this extensive experience, support for security sector reform has remained largely an ad hoc undertaking. The Organization has not elaborated principles and standards to guide its support for national actors in enhancing or re-establishing security. It lacks a system-wide approach to delivering coherent United Nations assistance in those contexts where it is active, and it has relatively weak capacity and resources to deliver effective support to national authorities.

A holistic and coherent United Nations approach to security sector reform is vital. Such an approach would provide a basis for a transparent framework for reform and international principles consistent with the Charter of the United Nations and human rights laws and standards. It would facilitate the provision of assistance to national authorities and their international partners engaged in security sector reform, while recognizing that Member States will provide the bulk of assistance in this area. It would also better position the Organization to provide support for national and regional authorities in the facilitation, mobilization and coordination of assistance and resources for security sector reform. Such an approach would increase the effectiveness and efficiency of United Nations efforts in that regard, thereby contributing to the timely withdrawal of United Nations peacekeeping operations, facilitating early recovery from conflict and helping to build the conditions necessary for sustainable peace and development. To that end, it would ensure that personnel in the field received the professional and timely guidance they requested and required.