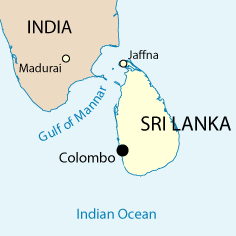 An independent view from the ground:

In October 2007, Sri Lanka is a complex admixture of military and political developments. Relations between the government of President Rajapakse and the Liberation Tigers of Tamil Eelam (LTTE) began to deteriorate soon after the Presidential Elections of November 2005. Although both parties formally stated that they still subscribed to the 2002 CFA (Cease Fire Agreement), military clashes of increasing intensity occurred from early 2006 onwards. In late 2006 government forces captured LTTE strongholds around the strategically significant Trincomalee harbour from where artillery had been fired into Navy installations and camps. In early 2007 the government moved into other LTTE dominated areas in Batticaloa and Amparai Districts of the Eastern Province. By June 2007 the majority of the LTTE’s forces which remained in the East had retreated to its jungle redoubt in the East – an area colloquially called ‘Toppigala’. In July 2007 the government attacked and captured this area and thereby effectively brought under its control the vast majority of the Eastern Province. At present the LTTE does not operate in large numbers in the Eastern Province. However, it retains the capacity to carry-out guerrilla attacks using small numbers of cadres and on occasion does so.

After the capture of the East, present statements by various government leaders and senior officials of the MoD indicate an intention of moving into the LTTE controlled Northern Province. What specific areas of the Northern Province, how and when this movement is to take place is being kept a close secret by the government. The disastrous attempt by a previous government, in 1997-1998, to move into the Northern Province has compelled the present government to
proceed with caution. While the government’s military initiatives of the last year has support amongst the people, there is a great deal of worry about the increasing cost of living.

Concurrent with these military developments there is an attempt by the government – via the All Party Representative Committee (APRC) – to develop a package of political reforms. This process, however, has been plagued with political in-fighting within the dozen-or-so political parties that constitute the government in parliament. The APRC has been working for more than a year but has still not been able to arrive at a position agreeable to all in the government.

With the effective decay of the Norwegian-facilitated CFA – although neither the government or LTTE has formally abrogated the agreement – the direct influence of third parties in the Sri Lankan conflict has witnessed a decline. The major donor countries and the UN, however, continue to exert pressure on the Sri Lanka government and the LTTE to desist from military action and to return to the negotiating table. At present there is no sign of such a return.

A selection of websites:

The GFN-SSR Document Library contains links to and a number of
summaries of articles either focussing specifically on Sri Lanka or using Sri Lanka as one of several case studies.

The Colloquium, organised by the Global Consortium on Security Transformation, brought together over 75 participants from throughout the world, including civil society actors, activists, academics and policy-makers, to begin rethinking current approaches and sharing innovative research in the areas of security and development.

The Global Consortium aims to develop and strengthen alternative and in particular Southern responses to security challenges in a manner that is responsive to the needs of those most at risk from poverty and insecurity. It is a partnership of primarily Southern-based institutions focusing on security issues from below through the lenses of equity, rights and human security.

The issue of security from below, i.e. how the poorest and most marginalised perceive and access security in the Global-South, provided an overarching theme for the Colloquium. Individual sessions prompted participants to consider further the new global, regional and local drivers of conflict and human insecurity, and explore how security could be more inclusive.

Discussions highlighted that there are a number of challenges for the Consortium including the fact that research needs to be grounded in the voices of people at the bottom but should also at the same time look towards global forces that create insecurity. The need for increased cross-regional collaboration, the primacy and use of local knowledge and the necessary involvement of grass-roots communities in research processes were emphasised as principles for future research activities undertaken by the Consortium.

Contact Robin Luckham or Rama Mani for further details of the Colloquium or visit www.icescolombo.org/gc.