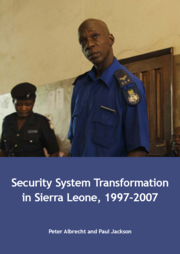 Printed in the UK by the
University of Birmingham
February 2009

This publication details the security sector reform (SSR) process and activities in Sierra Leone over this period and is the culmination of a wide consultation of many of the primary actors engaged in the process from both Sierra Leone and the UK. Following a core narrative constructed around four key events in the history of post-war Sierra Leone, starting in the mid-1990s and finishing with the successful General Elections of 2007, the work draws on a range of experiences from the process that may be used to inform future SSR policy and implementation, in Sierra Leone and elsewhere. SSR primarily grew out of governance as a response to the urgent problems on the ground in Sierra Leone and was supported by involvement from DFID, FCO and MOD and other Whitehall departments. This involvement is documented from different perspectives in the book.

This publication was commissioned by the UK Government Global Conflict Prevention Pool and written by the Global Facilitation Network for Security Sector Reform and International Alert.

International Alert is an independent peacebuilding organisation that has worked for over 20 years to lay the foundations for lasting peace and security in communities affected by violent conflict.