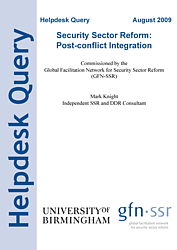 Printed in the UK by
the University of Birmingham
August 2009

This research paper was commissioned by GFN-SSR as part of a helpdesk support to inform HMG to report on its engagement in the context of Nepal. The query asked for illustrative examples and lessons of integration;  in particular, examples of integration into armies, integration into non-military forces (police, armed police, intelligence, etc), and creation of new security structures (industrial security forces, border police, etc) into which ex-combatants are then integrated.

One of the most contentious current challenges of the Nepali peace process is related to the future of the People’s Liberation Army (PLA) – the military organisation of the Communist Party of Nepal (Maoist) – CPN(M). The main parties struggle over the key questions of whether, how and according to what criteria the PLA should be integrated into the Nepali Army (NA) or other security forces. Furthermore, the question of integration of the PLA is linked to other issues, such as the prevalence of other militias and armed groups, and a broader debate on the cornerstone of a national defence strategy.

This paper provides a synthesis of key issues and lessons from academic and policy papers focused on issues relating to the integration of non-state and government military forces, as part of a wider peace settlement following civil war. As well as drawing upon existing studies the paper synthesises themes by examining the data from eight primary and fifteen secondary case studies, drawn from various sources.

An overarching and consistent theme throughout all case studies examined is the requirement, with integration endeavours, to view the process as the outcome. The integration of non-state military forces into the state security apparatus is an element of wider post-conflict peacebuilding and  statebuilding processes and as such the outcome is rarely predictable. An effective and sustainable solution from one context cannot be assumed to represent a template solution for other contexts. Support to the process of decision-making, and bodies established to implement decisions has been seen to be an effective strategy for external assistance.

The paper has highlighted the complex and diverse nature of efforts to integrate ex-combatants into state security forces. There exist as many approaches and solutions as there are contexts in which they have been attempted. An examination of the available case study material has, however, provided some consistent themes that have been highlighted throughout the paper as lessons identified.