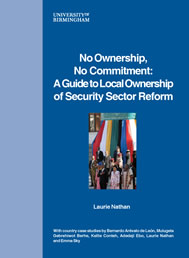 Author: Laurie Nathan
Printed in the UK by the University of Birmingham
© Laurie Nathan, 2007
First published May 2007
This edition published December 2007a

A major problem in security sector reform (SSR) has been a lack of local input to and ownership of the emerging reform agenda. Consequently, many donor governments and organisations have made commitments to the principle of local ownership. Yet this has become more a rhetorical device than a guide to donor practice. This paper, by the Crisis States Research Centre, aims to contribute to operationalising donor countries’ policy commitments to local ownership of SSR. It discusses the content and political nature of SSR, and presents guidelines on guaranteeing the engagement of local actors and ensuring the security needs of citizens are met. It identifies obstacles facing SSR and a framework for their analysis. It suggests means by which donors can improve local ownership and makes proposals on institutionalising local ownership in donor governments’ procedures. The paper also draws on case studies of Afghanistan, Ethiopia, Guatemala, Liberia, Sierra Leone and South Africa.

In practical terms, local ownership of SSR means that the reform of security policies, institutions and activities in a given country must be designed, managed and implemented by local rather than external actors. Donors should support projects initiated by local actors rather than local actors supporting donor programmes.

SSR takes place in a variety of environments, this limiting the applicability of generalisations that are often made. The strongest general recommendation that can be made is that donors should avoid a mechanical or formulaic approach to SSR and should instead develop programmes that are flexible and responsive to local actors and conditions. This paper also makes the following policy-relevant observations: