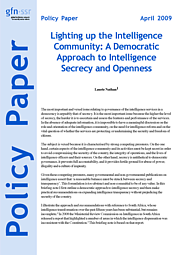 Printed in the UK by the University of Birmingham, 2009

The most important and vexed issue relating to governance of the intelligence services in a democracy is arguably that of secrecy. It is the most important issue because the higher the level of secrecy, the harder it is to ascertain and assess the features and performance of the services. In the absence of adequate information, it is impossible to have a meaningful discussion on the role and orientation of the intelligence community, on the need for intelligence reform and on the vital question of whether the services are protecting or undermining the security and freedom of citizens.

The subject is vexed because it is characterised by strong competing pressures. On the one hand, certain aspects of the intelligence community and its activities must be kept secret in order to avoid compromising the security of the country, the integrity of operations, and the lives of intelligence officers and their sources. On the other hand, secrecy is antithetical to democratic governance, it prevents full accountability, and it provides fertile ground for abuse of power, illegality and a culture of impunity.

Given these competing pressures, many governmental and non-governmental publications on intelligence assert that ‘a reasonable balance must be struck between secrecy and transparency’. This formulation is too abstract and non-committal to be of any value. This briefing note begins with an outline of a democratic approach to intelligence secrecy, and then makes practical recommendations on expanding intelligence transparency without prejudicing the security of the country.

The approach and recommendations with reference to South Africa, whose intelligence transformation over the past fifteen years has been substantial, but remains incomplete. In 2008 the Ministerial Review Commission on Intelligence in South Africa released a report that highlighted a number of areas in which the intelligence dispensation was inconsistent with the Constitution. This briefing note is based on that report.